GHFace.com > News > Trump Refuses To Accept Defeat, Says “This Election Is Far From Over”
News

Trump Refuses To Accept Defeat, Says “This Election Is Far From Over” 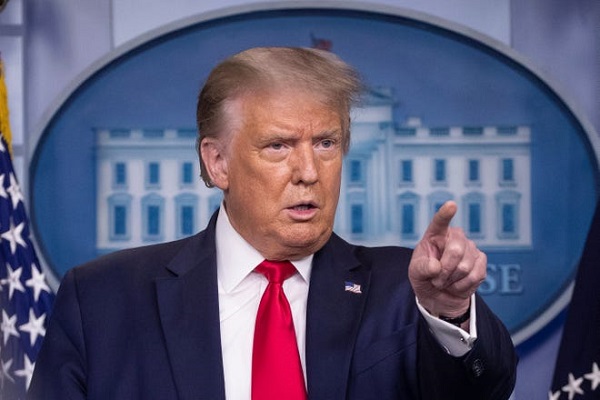 President Donald Trump said on Saturday his campaign would begin challenging U.S. election results in court next week after media outlets called the race for Democrat Joe Biden, saying “this election is far from over.”

“We all know why Joe Biden is rushing to falsely pose as the winner, and why his media allies are trying so hard to help him: they don’t want the truth to be exposed,” he said in a statement. “The simple fact is this election is far from over.”

Trump has repeatedly made unfounded claims of fraud in the election.

Meanwhile, President Trump called in his lawyers to shore up his dimming re-election prospects, but legal experts said the flurry of lawsuits had little chance of changing the outcome but might cast doubt on the process.

As Trump’s paths to victory narrowed, his campaign on Thursday was ramping up legal challenges and said it was planning to file its latest case in Nevada.

On Wednesday, the campaign sued in Michigan, Pennsylvania and Georgia and asked to join a pending case at the U.S. Supreme Court.

Experts said the litigation serves to drag out the vote count and postpone major media from declaring Biden the victor, which would have dire political implications for Trump.

“The current legal maneuvering is mainly a way for the Trump campaign to try to extend the ball game in the long-shot hope that some serious anomaly will emerge,” said Robert Yablon, a professor at the University of Wisconsin-Madison Law School. “As of now, we haven’t seen any indication of systematic irregularities in the vote count.”

Trump campaign manager Bill Stepien said in a statement Wednesday the lawsuits were aimed at ensuring legal votes were counted.

“The lawsuits are meritless,” said Bob Bauer, who is part of Biden’s legal team. “They’re intended to give the Trump campaign the opportunity to argue the vote count should stop. It is not going to stop.”