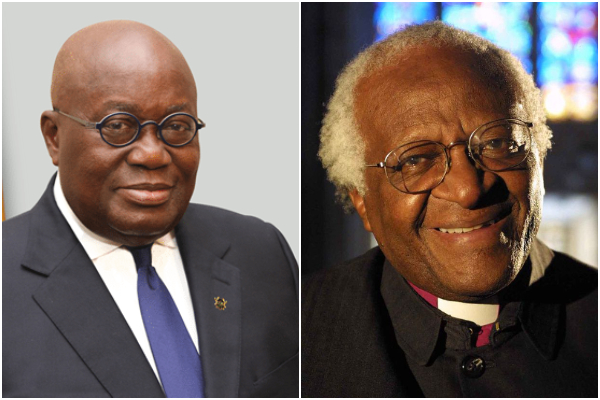 The Ghanaian president in eulogizing Archbishop Desmond Mpilo Tutu said he was a defender of the freedoms and rights of Africans and the oppressed peoples of the world.

President Nana Akufo-Addo who expressed his deepest condolences to President Matemela Cyril Ramaphosa, to the people and government of the Republic of South Africa on the death of Archbishop Desmond Mpilo Tutu said;

“The story of Africa’s struggle to free itself from colonialism, imperialism and the racist ideology of apartheid has been immeasurably enriched by the contribution of this jovial, dedicated and principled defender of freedoms and of the rights of Africans and of the oppressed peoples of the world.

“His work as chairman of South Africa’s historic Truth and Reconciliation Commission, established by his outstanding compatriot, contemporary and friend, Madiba, President Nelson Mandela, the first president of democratic South Africa, has played a decisive role in promoting reconciliation between the peoples of the South. Africa in the post-apartheid era, which brought a united South Africa out of the rubble of apartheid, to the astonishment of many in South Africa and around the world.

“The Commission provided an example that was followed elsewhere in several African countries, where systematic human rights violations had at one point become part of their political culture, including in our own Ghana.

“He ran his race in front of him and leaves indelible marks in the sand of time. May his soul rest in perfect peace in the bosom of the Almighty, until the Last Day of Resurrection when we will all meet again. Amen!”

The Nobel Peace Prize laureate who helped end apartheid in South Africa has died at the age of 90.