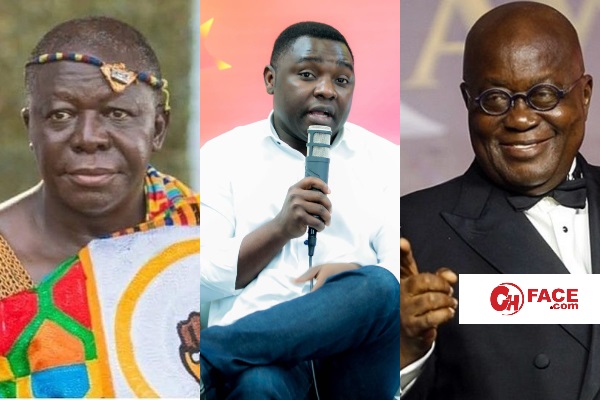 US-based Ghanaian journalist, Kevin Taylor in a lengthy social media post has expressed his disappointment over Ashanti King, Otumfuor Osei Tutu II allowing himself to be fooled by President Akufo-Addo.

The broadcast journalist who doubled as a social commentator said Otumfuor Osei Tutu II is among the masses that are being taken for granted by this NPP government under the leadership of Nana Akufo-Addo.

‘Angry’ Kevin Taylor in his write-up told the Asantehene to wake up to himself in order to demand development for the people from the president.

Dear Otumfuo Osei Tutu II,
I’m your Son, I love you and I love Asanteman and I know you love me too but it’s only right that I speak truth to you.
Nana, we have gotten to a stage where the plain truth must be spoken to you even if it hurts because it’s the only way Asanteman will be liberated.
The Golden Stool you sit on today as a King signifies bravery, just, speaking truth and projecting Asanteman.
With all due respect Your Royal Highness, the sacred Sikadwa cannot just be reduced to Pre and Post election conflicting mediation stool. It’s a stool that should prioritize the progress of Asanteman.
There is a good reason God in his own wisdom brought traditional leadership before modern Politics.
It is why when Politicians like Akufo Addo and his current crop of leaders are fooling the masses of which you are among, you pull the break and speak sense to them because it’s not always that you will have to speak in parables.
Sometimes, you must speak in plain language. Otumfuo, It’s not all your subjects who will have the opportunity to occupy the extremely important Position you occupy, that is why it’s imperative on you behalf to speak for the liberation of your subjects and even those who are not your direct subjects because Asanteman loves and cherish everyone.