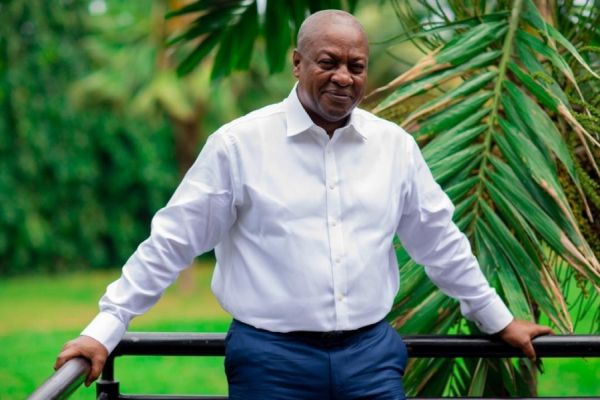 The leader of the National Democratic Congress, John Mahama gave a speech after the 2020 presidential results were declared.

My brothers and sisters,

Allow me to begin by expressing my deepest gratitude to you for your tremendous support— which you expressed overwhelmingly and convincingly at the polls. There is no doubt that Ghanaians from every region of this great nation voted for change—and we did so in both the Presidential and the Parliamentary elections.

I am a staunch believer in the experiment of democracy, the system of governance that allows the ultimate decision-making power to rest in the hands of you, the good people of Ghana. We, the people who, with an eye toward to future we would like for our dear country, elect representatives to go forward and realize that vision. Government serves at the choice, direction, and pleasure of the people of this great nation. And I have had the honor and privilege to serve my country in all levels of government.

When, in 2016, at the end of my first full term as President I ran for re-election as an incumbent candidate, I respected the will of the people. I conceded, stepped aside, and set in motion a peaceful transfer of power—because I understood that it was the will of the people. And if we are to progress as a nation, if we are to live up to the inheritance of our history, one for which people have paid the ultimate price—that sacred verdict of the people must be respected.

It must be protected. It has been my pledge throughout my time of service as a representative to the good people of Ghana to do exactly that. And that it why I stand before you tonight unwilling to accept the fictionalized results of a flawed election. My Brothers and Sisters, it is important to remember that the government that is in power controls all of the state resources and oversees all of the state’s institutions. The line he treads between his loyalty to the power that is held by the people, and by his own desire to hold on to power, can be a thin one indeed.

We went into the 2020 Presidential and Parliamentary elections with assurances from the Electoral Commission and the relevant state actors that it would be conducted in an atmosphere free from fear, and that it would be fair, transparent, and credible. Unfortunately, that has not been the case. What we witnessed across the country from Monday December 7, 2020 exposed a deliberate plan to manipulate and predetermine the results of the election in favour of the incumbent candidate, Nana Akufo-Addo, who, as so happens, controls all of the state resources and oversees the state’s institutions. Despite all of the ruling party’s inducements, use of monetary enticements, and other such schemes on a scale never before seen in this country, the good people of this country understood what was at stake, and it was clear, as the result of the votes that were legally cast that the National Democratic Congress (NDC) won the Presidential and Parliamentary elections. No amount of trickery, sleight of hand, or obfuscation will erase that reality.

I am extremely proud of our parliamentary candidates who have earned for themselves the title of “giant elephant killers.” We went into the Parliamentary election with a deficit of 63 seats. We made up for our 2016 losses and we are now set to become the majority in Parliament. This historic feat after one term demonstrates the strength of our great party, and the strength of the mandate given to us by the good people of Ghana to lead. In respect of the Presidential elections: the facts and figures available to the us from pink sheets and other evidence that has unfolded across the country, indicate that numerous steps have been taken to manipulate the results of the election in favour of the incumbent President.

This calls into question the credibility of one of our most important institutional pillars of democracy—the Electoral Commission. It is now obvious to many objective minds that the Chairperson of the Electoral Commission has been used to manipulate results from the various constituencies and in that process seek to subvert the sovereign will of the Ghana People. My Brothers and Sisters, one matter requires special mention. The use of the military in this election is unprecedented.

Armed forces featured heavily as an intimidating measure to reverse election results, and they continue to be used in the same intimidating role to insist on recounts in areas in which the incumbent has lost whilst arm-twisting election officers during these supposed recounts. We will not accept anything short of a declaration of the legitimate results, which point to an NDC Parliamentary Majority.

My Brothers and Sisters, advisedly, since the inception of the Fourth Republic, final election results have always been declared within 72 hours to allow for a thorough and diligent collation. Surprisingly, this Electoral Commission Chairperson announced, quite suspiciously and for reasons known to her, a hurried 24-hour deadline, which as we all know could not, and would not, be met. The Chairperson of the EC, in less than 24 hours after her declaration, has admitted that she has made unacceptable errors, which go to the heart of the entire electoral process and cast deep doubt on the credibility of the announced outcome.

The Electoral Commission of Ghana has never brought its credibility to this historic low at such a crucial moment of election result declaration. In fact, the litany of irregularities and blatant attempts at rigging for a candidate is obvious and most embarrassing. Ghana has come too far in our democracy, in our transparency, and in our well-earned international reputation for free and fair and nonviolent elections, to find ourselves here, where we are with this election.

As has been announced by our party, the National Democratic Congress: We are unable to accept the outcome of the election as declared by the Electoral Commission Chairperson, Mrs. Jean Mensah. Those results are flawed and discredited. When it comes to the parliamentary elections, the NDC has a working majority of one hundred and forty 140 seats. What has happened since, was a deliberate attempt, targeting five (5) of the 140 seats, to steal and, thus, subvert the people’s verdict. A closer look and detailed examination of the constituency specific facts cast very dark clouds on our democracy. Allow me to speak in specifics, so our claims are known to all.

In Sefwi Wiawso, the results were declared without the contents of one ballot box being counted. The parties had agreed that an issue of alleged over-voting should be referred to the collation centre to be resolved. The ballot box mysteriously disappeared enroute to the collation centre. Nevertheless, results were declared in favour of the NPP Candidate. In Upper Denkyira West, the EC official deferred the declaration of results because of death threats.

The results favour the NDC candidate as has been confirmed earlier today. In Sene West, a ballot box was snatched, and the culprit apprehended. The seal of the NPP must have dislodged in the ensuing scuffle. That of the NDC and the Electoral Commission were intact. However, NPP would not allow the contents of the ballot box to be counted and added to the lot because it would obviously favour the NDC.