GHFace.com > News > NIGERIA: What is SARS and why are people protesting against police?
News

NIGERIA: What is SARS and why are people protesting against police? 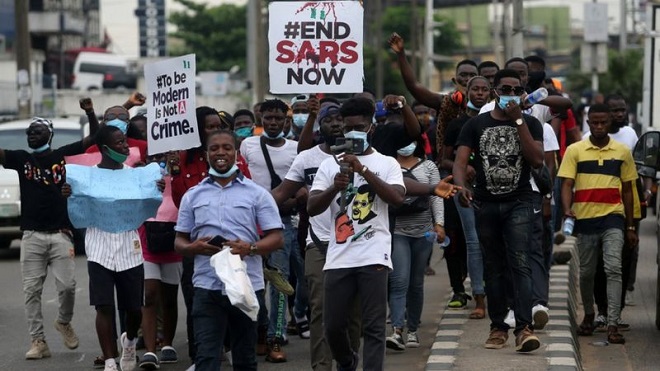 The Special Anti-Robbery Squad (SARS) was a branch of the Nigerian Police Force created in 1992 for peculiar assignment.

It was established by the Nigerian government to specially deal with crimes associated with robbery and firearms.

Initially, it was successful in reducing cases of violent crime but more recently the unit had been “turned into banditry”, according to Fulani Kwajafa, the man who set up SARS.

Also, the group quickly became controversial for its links to extrajudicial killings, torture, and other illegal activities.

Amnesty International has reported cases of unlawful killings and police brutality allegedly carried out by the group for years.

In June 2020, it released a report suggesting SARS officers continued to commit human rights violations, including at least 82 cases of torture, ill-treatment, and extrajudicial execution between January 2017 and May 2020.

Amnesty said the report “reveals a pattern of abuse of power by SARS officers and the consistent failure by the Nigerian authorities to bring perpetrators to justice. It highlights the deficiencies in Nigerian police accountability that contribute to, and exacerbate, these violations.”

What is the #EndSARS movement?

It started with thousands of young protesters have marched in cities across Nigeria with banners reading: “#EndSARS.”

The Nigerian government in response to the demonstration announced it would ban the anti-robbery squad on 11 October.

However, the demonstrators have not been satisfied with the announcement and are demanding an end to abuses and respect for human rights in all parts of the Nigerian police force.

Amnesty International has blamed Nigeria’s security forces for at least 10 deaths during the protests.

It has also accused the police and military of using excessive force against demonstrators.

Protests have stopped traffic in Lagos, the capital Abuja and many other large cities throughout Nigeria.

Who has spoken out against SARS and the shootings?
Responding to the reports of shootings, US presidential candidate Joe Biden said: “I urge President [Muhammadu] Buhari and the Nigerian military to cease the violent crackdown on protesters in Nigeria, which has already resulted in several deaths.

“My heart goes out to all those who have lost a loved one in the violence. The United States must stand with Nigerians who are peacefully demonstrating for police reform and seeking an end to corruption in their democracy.”

Rihanna has said her “heart is broken for Nigeria”.

“I can’t bear to see this torture and brutalization that is continuing to affect nations across our planet,” she said in a post on social media.

Beyonce has also spoken out in favor of the #EndSARS movement.

A statement from the singer on the Twitter feed of her charitable foundation, BeyGood, said: “I am heartbroken to see the senseless brutality taking place in Nigeria. There has been to be an end to SARS.

Nigerian singer Tiwa Savage, who worked with Beyonce on her visual album Black is King, had called on the star and her team to use their voices to raise awareness about the situation.