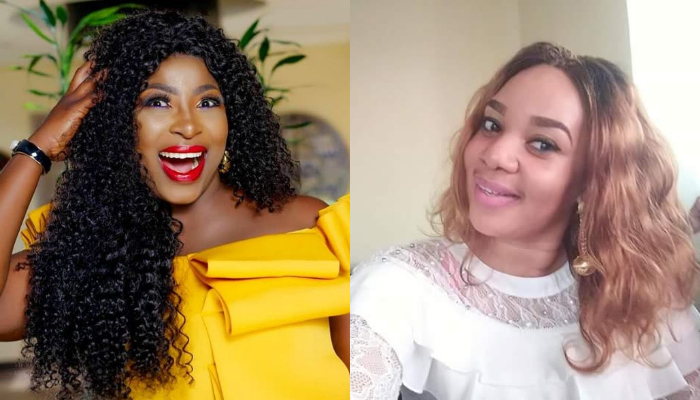 Former “Efie Wura” Television Actress, Maame Assah, has finally opened up on why she quit the popular hilarious series after many years.

She shockingly told the world in a recent interview that her colleague Gloria Osei Sarfo was the main reason why she quit the “Efie Wura” series in 2011.

Speaking exclusively to Nana Kwame Gyan on “Highway” on an Accra-based Yonkopa 89.1 FM and monitored by Fnnewsroom, Maame Assah stated loud and clear that her decision to quit featuring in “Efie Wura” was all because of the ‘devilish’ Gloria Sarfo.

According to her, everything seemed to be going on very well until Gloria Sarfo appeared in the scene.

She mentioned that when Gloria Sarfo came to meet her in “Efie Wura” series and upon her arrival, everything started to go bad.

“… Everything seemed to be going very well until one day when Gloria Sarfo in the picture. That girl was really a torn in my flesh. I was featured in “Efie Wura” way back before they brought in Gloria Sarfo and she came to destroy everything.”

She also added that even her husband (now ex) has changed completely towards her all because of this Gloria Sarfo girl.

“Even my husband started to act mischievously to me when that thing called Gloria came into the picture.”

Maame Assah said her family looking at how things were going called her and advised her to quit the series for her own good.

“… the way things were going, my family called and advised me to just quit “Efie Wura”.

However, all attempts by the Eddie Kay, the Producer to get Gloria Sarfo to respond quickly to Maame Assah’s allegation has proven futile as she refuses to speak on air.

the authorEditor
All posts byEditor