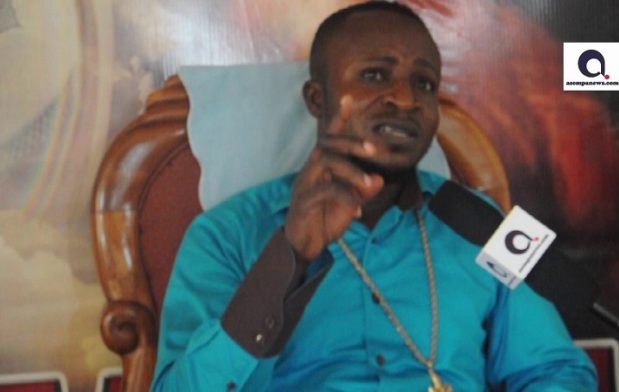 Prophet Computer Man slammed his colleague Prophet Badu Kobi after the latter in a viral video made very derogatory statements against women of some particular tribes while preaching in church saying “Fanti women are foolish sometimes and Ewes too are doormats. But for Ashanti women no!.

According to the video, Prophet Emmanuel Badu Kobi disclosed that he will not allow any of his sons to marry from Ashanti tribe because they are always disrespectful and greedy.

Prophet Badu Kobi who strives on controversies said; “If you marry Ashanti lady, you have imported problem for yourself forever. I have done research and it is so.”
On the Ashanti women, he said;

“If you marry Ashanti lady, you have imported problem for yourself forever. I have done research and it is so. Ashantis, their eyes red (greedy), looking for a property, looking for things to carry back. Their mother is at the corner, influencing everything. I have done my research…. If my daughter is going to marry, I will tell her, if you want to go and be driven back, go and behave like an Ashanti girl. The Ashanti men are there, I am telling you, Ashanti women don’t respect Ashanti men, especially when you are broke, (they would tell you) You, you, who are you? She will dress you from the top because the mother is always talking with her. I am telling you the truth, I am telling you the truth ooo!”

On the Fanti and Ewe women, he said;

“Fanti women are foolish sometimes and Ewes too are doormats.”

His comments which have generated public uproar on social media have been roundly condemned by many right-thinking Ghanaians.

Commenting on the issue in an interview with host Kwaku Owusu on ‘Anopa Kasapa’ on Kasapa FM Prophet Eric Amponsah aka Computer-Man said under no circumstances should a man of God make such loose-talk.

“Ashanti women are very hardworking and support their husbands but they don’t like to be cheated. How can a Pastor speak so recklessly, how can you say Fante women are foolish, Ewe women are doormats. Is he saying there are no Ashanti women in his church, I feel so sad for Ashanti women in his church? Is this the way to talk in this day and age when there’s so much civilization and the Spirit of God is working through His children.?
“Prophet Badu Kobi is trying to start a tribal war and he should not be countenanced. If he doesn’t take care there’ll be a huge division among his church members and may result in the collapse of his church.”
Prophet Eric Amponsah added: “If he’s smart what he should do is to immediately cause his aides to release a statement on his behalf and speak to the matter in order to reduce the tension his comments have generated. He himself cannot retract his statement said on the pulpit if he does that he’ll lose his credibility.”